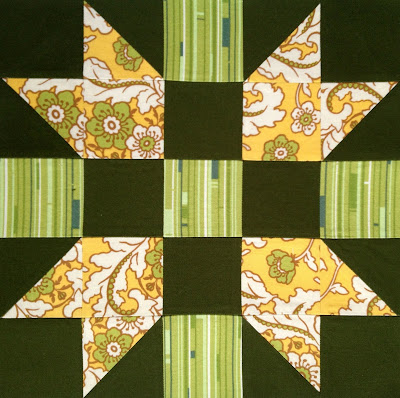 This 12" Father's Choice quilt block is the twelfth and final one of my Irish Great-Grandpa Sampler Quilt.  I found the pattern on Block Base, but a 10" block found at Quilters Cache is very similar but with different block coloration.

While my maternal grandmother was still in high school, she interviewed her father, James Lynch, at the urging of her older brother Will, who was living in China at the time.  (Read his letter to her here.)  Later, she wrote a biography of her father from the notes she'd taken during the interview.  Following is the final part of this biography:

"On March 3, 1880, James Lynch married Caroline Eliza Dunmire in Emporia, Kansas.  She was the daughter of Reuben and Susanna Canon Dunmire.  Caroline was born in Fulton County, Illinois on January 19, 1863.

﻿﻿
"Burkes Registry records that the name of Lynch came from the O'Loingsigh family and was the Gaelic way of spelling.  It was Anglicized to O'Lynchy in the 1500's, then to just Lynch.  This name was first recorded in the Irish counties of Galway, Antrim, and Down.  It was translated as "Sons of the Navy Man."  They were one of the original "Tribes of Galway."  The Lynch Shield was a blue shield with a gold chevron between three rosettes."


Are you interested in reading more about this quilt?  You'll find it all right here.