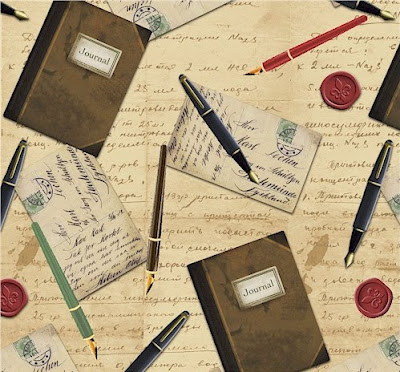 My backing fabric for my Farmer's Daughter Quilt is from the line Books and Letters by Whistler Studios for Windham Fabrics.  http://www.windhamfabrics.net/cgi-bin/fabricshop/gallery.cgi?func=show&file=1&Category=576&Page=1&v=1

I first considered choosing a Kansas Troubles fabric because my grandmother lived her entire life in Kansas.  But when I found this fabric featuring journals, I knew it was meant for this quilt.  The purpose of this project was to create blocks to go with my grandmother's 1916 diary entries.

My friend and long-armer is going to quilt it for me.  I love her work.  She does everything freehand.  She has gotten very good results using bamboo batting, so that's what she'd like to use in my quilt.  Since it is a large king-sized quilt, she feels the lightweight bamboo will be perfect.
﻿
You might also enjoy reading my previous blog post:
﻿﻿﻿﻿http://www.starwoodquilter.blogspot.com/2012/10/farmers-daughter-quilt-before-borders.html
Posted by Starwood Quilter at 3:00 PM 9 comments 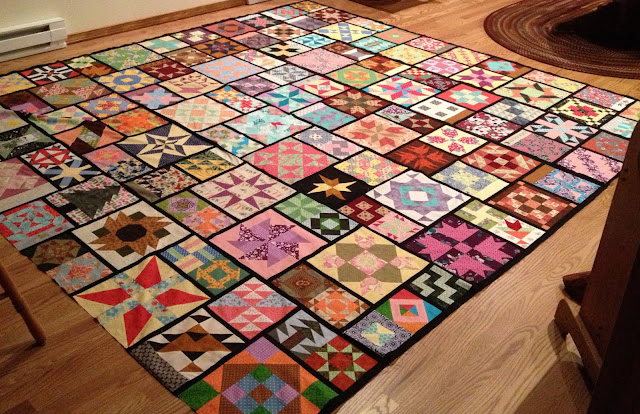 This is my Farmer's Daughter Quilt before borders are added.  The borders will also be black and probably about 3" wide, so they will not radically change the look of the quilt.  Before borders, my quilt is 108" wide by 117" long - so it is difficult to know how to photograph it!

I wanted each block to be featured, so I decided on a stained glass effect.  I sewed a 3/4" horizontal black sashing between the blocks so that each of these 58 rectangles ended up being 18-3/4" long.  They were of different widths, though.  I ended up with: 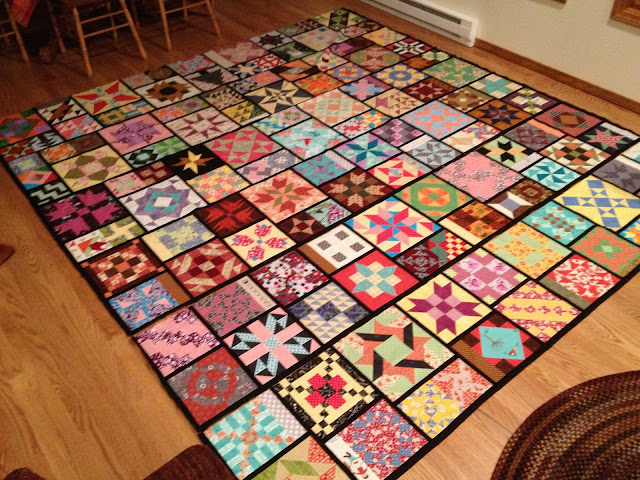 After laying it out on paper, I worked with one row at a time and laid out the real blocks.  For example, one row called for 6 - 12" blocks, 2 - 10" blocks, and 1 - 9" block.  I arranged them the way I wanted and sewed the same 3/4" black sashing in between the blocks.  I began with the middle rows first because I knew those would show up the most on my king-sized bed. 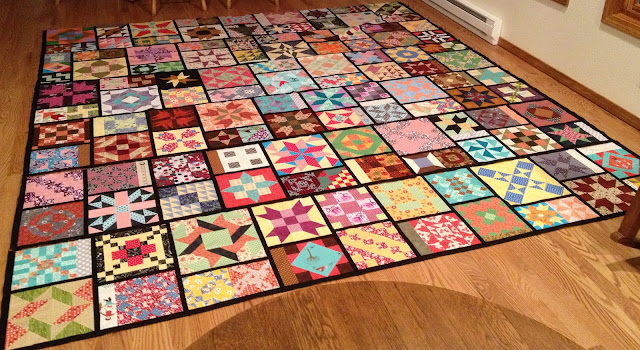 I will take another photo when the outside borders are on! 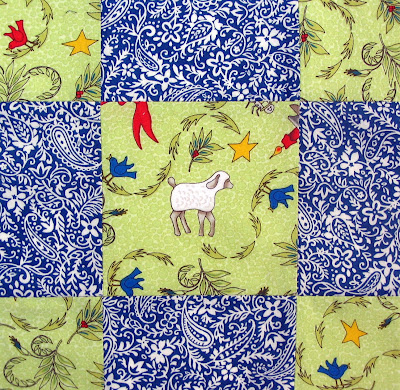 The Lord is my shepherd,
I am one of his lambs.
I shall not want -
He takes good care of me.
He makes me lie down in green pastures,
Where the grass is tender and cool.
He leads me by the still waters
So I may drink from his Holy Word.
He restores my soul
Which gives me peace and comfort.
He leads me in paths of righteousness
And does not allow me to stray
For his name's sake -
Because I belong to Jesus.
Even though I walk through dark valleys
Where Satan lurks,
I shall fear no evil
From the Devil's wiles;
For you are with me,
Holding me close.
Your rod and your staff
Give me strength and guidance.
They comfort me,
Relieving me from daily pressures.
You prepare a table before me
For my convenience and sustenance,
In the presence of my enemies -
But my family and friends surround me.
You anoint my head with oil -
To relieve my mind from worry.
My cup overflows
With joy and assurance.
Surely goodness and mercy will follow me;
Then, God's presence will ever be with me
All the days of my life;
And I will dwell in the house of the Lord forever
because he has prepared many rooms for all of
his children who love and obey him.
For ever and ever.  Amen.
Harriet George
July 31, 1979 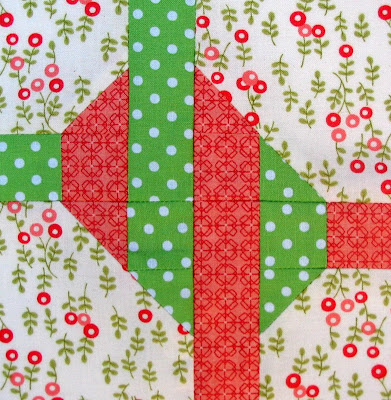 I found this Love Knot quilt block pattern in 5,500 Quilt Block Designs by Maggie Malone.  ﻿I drafted it to a 6" block and really enjoy making this unusual pattern.
My cousin Phil grew up next door to our grandparents.  In 1982, he wrote:


"Grandmother's top talents are two-fold: first, knowing and interpreting the Scripture and second, her written composition and poetry.  Each birthday card or Christmas package would include a short, original verse.  I will always remember her corn and oysters casserole, homemade cottage cheese and home-churned, turkey-shaped butter created especially for family dinners at Thanksgiving and Christmas.
"Although she has lived ninety-five percent of her life in two places within five miles of each other, she actively developed an international perspective, and her influence in people's lives has been worldwide.

"She and Granddad opened each morning with devotions together at breakfast and closed each day sharing time together in the living room or watching the sunset on the back lawn.

"In many ways they were opposite from each other.  For example, Granddad seemed to enjoy travelling and visiting with people whereas Grandmother seemed to enjoy sharing her home.  She has always been very meticulous both in her dress and her work whereas this was not as important to him.  It was remarkable how they came together and complimented each other.  They shared over fifty-one years of wedded life together.  They both loved each other very much and loved their family immensely."

1.  Preheat oven to 350 degrees.
2.  Pour one can of corn into a greased 1-1/2 quart casserole dish.
3.  Cut each oyster in two.  Put half the can of oysters in a layer on top of the corn.  Break up 7 crackers over the oysters and dot with 1 Tablespoon butter.
4.  Repeat with the rest of corn, oysters, crackers, and butter.
5.  Bake 20 to 30 minutes until bubbly and the crackers are browned.  ﻿

You might also enjoy reading my previous blog post:
http://www.starwoodquilter.blogspot.com/2012/10/grandmothers-own-quilt-block.html﻿﻿﻿﻿﻿﻿﻿﻿﻿﻿﻿
Posted by Starwood Quilter at 7:59 AM 3 comments 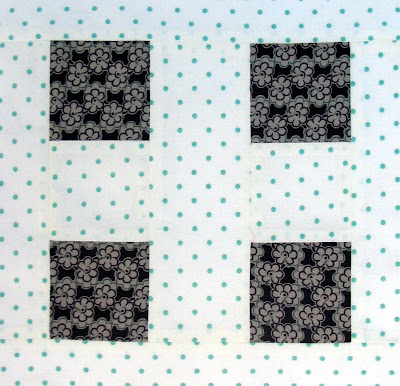 I found the pattern for this Grandmother's Own block in 5,500 Quilt Block Designs by Maggie Malone.  It is also known as Shepherd's Crossing and Four Square.  I drafted the pattern to make an 8" block.
After my grandparents married and settled into their home in October, 1917, they had three sons and a daughter - Jackson, Phil, Doug, and Eleanor.  Years later, they also had 15 grandchildren and 30 great grandchildren.

There was the dining room table,
set with her crystal,
and the apple dishes we loved
that was the table where she served her guests
And then there was the kitchen table
It was a very functional thing,
a wooden frame painted white
and a porcelained steel top
At that table she entertained her grandkids
At the kitchen table Grandma did her work,
It seemed her hands were always busy
kneading bread
cutting cookies
churning butter
slicing apples
putting up preserves
and wiping the dishes clean again
Grandma's hands
must have had minds of their own
Because while they were busy
preparing the day's next meal
Grandma would tell us stories
of days long ago
Stories about the people
that passed through her kitchen
Stories about Great-Grandma's kitchen,
where she learned to cook
And animal stories:
Great Granddad's dog
Uncle Bob's lamb
and the horse Mom rode to school
Grandma's kitchen was warm,
because that's where her stove was
Grandma's kitchen was cozy
because that's where Grandma was
And though we were Grandma's guests
we knew that Grandma's kitchen
was the place where we belonged.
George R. Pasley, 1995

Email ThisBlogThis!Share to TwitterShare to FacebookShare to Pinterest
Newer Posts Older Posts Home
Subscribe to: Posts (Atom)
Welcome! This where I write about my quilting projects, including my 140-block Farmer's Daughter Quilt that I made to go along with my grandmother's 1916 diary - written the year she turned 21.
The Quilters' Book Club has now ended, but you can read all about it by clicking the links above.