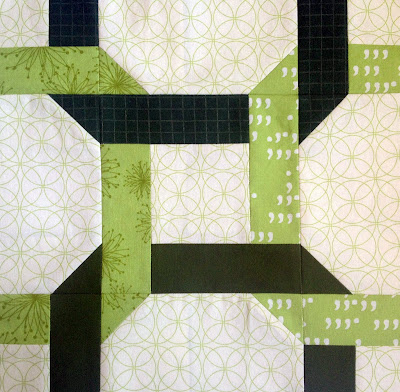 This is the first block of my Irish Great-Grandpa Sampler Quilt.  I found the pattern for this 12" Celtic Twist block free on-line here.  It was not a difficult block to make, and I love the pattern.  I think it serves as a perfect introductory block to my quilt.

While my maternal grandmother was still in high school, she interviewed her father at the urging of her older brother Will who was living in China at the time.  (Read his letter to her here.)  Later, she wrote a biography of her father from the notes she'd taken during the interview.  Following is the first part of this biography:

"James Lynch was born in the village of Clonmel in the county of Tipperary in the country of Ireland on March 16, 1836.  His father was Thomas Lynch, and his mother was Johanna Pendergast.  They were poor farmers who rented for lifetime.

"Most land was owned by English nobility, and there was no chance to ever own it.  The land was rolling and grassy.  The family owned a horse and a cow.  Houses were made of clay and straw mixed and roofed with thatch.  Farms were very small, and the population was dense.  Roads were of broken rocks, of which there were plenty.  Rent was high.  Taxes were also high, and ten percent of the taxes went to the Catholic Church.  James' only chance was a little schooling up to the fourth grade.  The only schools were in the Catholic Church, taught by the priest.  The desks were shelves nailed to the wall around the room, and the students stood up to them.  There were no recesses.  The priest was harsh and whipped often.  His main interest was in good penmanship, and Mr. Lynch learned to write very well."

Ireland has the perfect climate for raising oats.  This recipe comes from my mother.