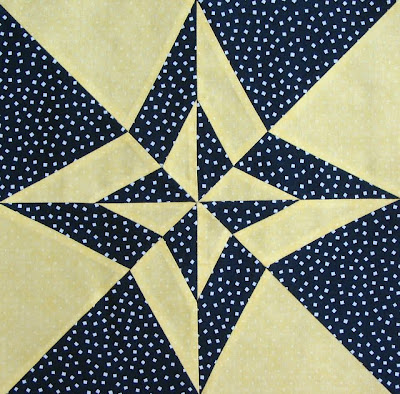 This 12" Night and Day block took me most of a day to make.  I am so glad it's done!  I started out with paper piecing and did 1/4 of the block that way.  I  ended up using templates for the remaining 3/4.  I found the free pattern on-line here: http://www.quilterscache.com/N/NightandDayBlock.html
According to Dictionary.com, a Burletta is a musical drama containing rhymed lyrics and resembling comic opera or a comic play containing songs.  I believe the Bronco Bill show the kids wanted to go to is a cowboy movie, part of a very popular series of movies:
http://en.wikipedia.org/wiki/Broncho_Billy_Anderson_filmography

Wednesday, May 3, 1916 (written Thursday) -
"As it was 5 minutes before twelve when I got in last night, I decided to leave all unnecessary duties until morning.  Howell and I took in the Burletta that the Key West Glee Club gave.  It would have been more appreciated, I think, had it not been quite so long and drawn out.  We sat with Stub and Fern and had a good time except we became mighty tired.  It lasted until after 11:00 and grew rather monotonous.

"I sewed all morning, began making my crepe dress.  Then in the afternoon, Mother and I went to town.  I didn't have the slightest intention of buying a hat when I went, but Mother wanted me to look at some.  The first thing, she showed me one that was a perfect match for my suit - it was also a very stylish hat and looked well on me so without much delay, I brought it home.  I wore it with my suit to the play and am really quite crazy about them both.  I think I'll like the change from the conventional blue."


Thursday, May 4, 1916 -
"I'm so sleepy; Mrs. Hile said I nearly went to sleep coming up stairs.  I certainly don't envy the spectators at Bronco Bill's show tonight.  The kids wanted to go - in fact, talked of nothing else - so Orvel, out of the kindness of his heart, told Mother to let them go, and he would go with them.  He hadn't intended to go at all.  He told me he was saving his quarters to go hear Billy Sunday.

"Papa left for Wallace again this morning.  It has been a beautiful day and promises to continue so. . .

"Although Papa was very kind and let me sleep this morning, I am ready for bed now!"